Posted by refresh yoursoul at 3:33 PM No comments:

Posted by refresh yoursoul at 11:33 AM No comments:

Posted by refresh yoursoul at 1:46 PM No comments: 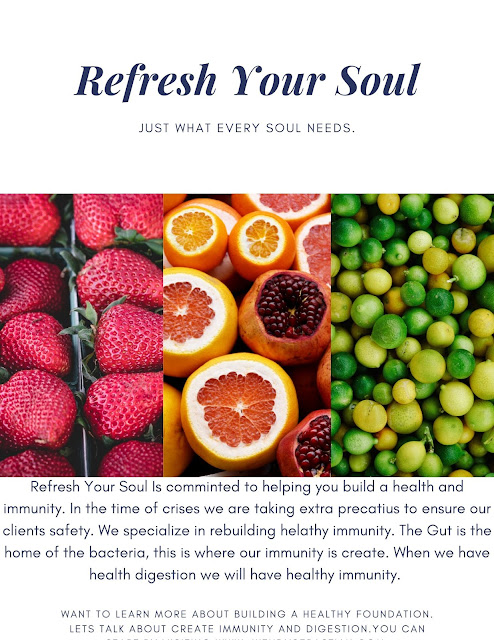 Posted by refresh yoursoul at 1:07 PM No comments:

What is leptin and why is it important and most of all, how does it affect my metabolism?

Leptin is considered the satiety hormone; the hormone is in our fat cells. It regulates our hunger and has a lot to do with our energy balance. When we lose weight " body fat" we feel less hunger but this Naturally decreases our energy balance. Leptin is one of the Key player in our body's homeostasis. So even when we lose weight our body still thinks it's homeostasis is our starting weight. Therefor your brain is continually fight you get you back to homeostasis. That is why the human yo-yo, is so coming. That is why statics show 95% of people regain the weight within 3 years of losing it. There are some other contributing factors, however leptin is the main player.

Most people have no clue how their body work or their anatomy, it is very important to now the mechanic of driving a car before you get behind a wheel. To be a good drive, you must learn to be an offensive and defensive driver. Understanding the hormones and how they interplay with insulin and metabolism is essential to building a sustainable lifestyle.

RYSE is a program to educate and to help my client build a tool belt to they can live the lifestyle they want to live and be free to make a healthy lifestyle that is sustainable and is manageable.

Posted by refresh yoursoul at 1:18 PM No comments:

It's me? Or is it your HORMONES? 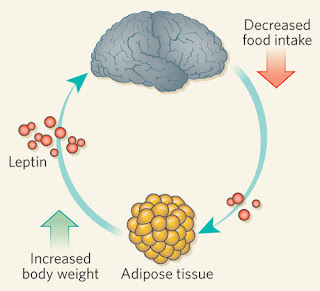 Leptin is a hormone that is produced by the body’s fat cells.

It is often referred to as the “satiety hormone” or the “starvation hormone.”

Leptin’s primary target is in the brain, particularly an area called the hypothalamus.

Leptin is supposed to tell the brain that we have enough fat stored, that we don’t need to eat, and that we can burn calories at a normal rate.

It also has many other functions related to fertility, immunity, brain function and others (5).

However, leptin’s main role is long-term regulation of energy balance… the amount of calories we eat and expend, and how much fat we store on our bodies .

The leptin system evolved to keep us from starving or overeating, both of which would have made us less likely to survive in the natural environment.

These days, leptin is very effective at keeping us from starving. But something is broken in the mechanism that is supposed to prevent us from overeating.

Bottom Line: Leptin is a hormone that is produced by the fat cells in the body. Its main role is regulating how many calories we eat and burn, as well as how much fat we carry on our bodies. 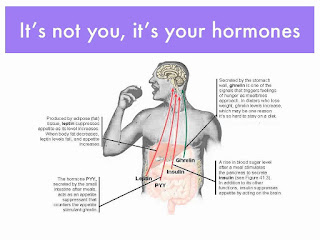 Losing Weight Reduces Leptin, so The Brain Tries to Gain The Weight Back

Diets are so ineffective that whenever someone goes from obese to thin, it is seen as newsworthy material.

The truth is… when it comes to losing weight, long-term success is the exception, NOT the rule.

There are many possible reasons for this, but the research is showing that leptin may have a lot to do with it

Losing weight reduces fat mass, which leads to a significant reduction in leptin levels, but the brain doesn’t necessarily reverse its leptin resistance.

When leptin goes down, this leads to hunger, increased appetite, reduced motivation to exercise and decreased amount of calories burned at rest .

Basically, the reduced leptin makes the brain think it is starving… so it initiates all sorts of powerful mechanisms to regain that lost body fat, erroneously thinking that it is protecting us from starvation.

In other words, the brain actively defends the higher amount of fat mass, using strong biochemical forces that compel us to eat back the lost weight.

The majority of dieters will be familiar with this… weight loss is often easy in the beginning, especially when motivation is high, but very soon hunger, cravings and a reduced desire for exercise set in.

This is the main reason so many people “yo-yo” diet… they lose a significant amount of weight, only to gain it back (and then some).

Bottom Line: When people lose fat, leptin levels decrease significantly. The brain interprets this as a starvation signal, changing our biology and behavior to make us regain the lost fat.

What causes Leptin Resistance
Inflammation: Inflammatory signalling in the hypothalamus is likely an important cause of leptin resistance in both animals and humans.
Free Fatty Acids: Having elevated free fatty acids in the bloodstream may increase fat metabolites in the brain and interfere with leptin signalling.
Having high leptin: Having elevated levels of leptin in the first place seems to cause leptin resistance.
Pretty much all of these factors are increased in obesity… so this may form a vicious cycle where people get fatter and increasingly more leptin resistant over time.

There are several things you can do:

Avoid processed food: Highly processed foods may compromise the integrity of the gut and drive inflammation .
Eat Soluble Fiber: Eating soluble fiber can help improve gut health and may protect against obesity .
Exercise: Physical activity may help to reverse leptin resistance .
Sleep: Poor sleep has been implicated in problems with leptin .
Lower your triglycerides: Having high blood triglycerides can prevent the transport of leptin from blood and into the brain. The best way to lower triglycerides is to reduce carbohydrate intake.


Eat Protein: Eating plenty of protein can cause automatic weight loss. There are many reason for that, one of them may be an improvement in leptin sensitivity .
Posted by refresh yoursoul at 8:15 AM No comments: 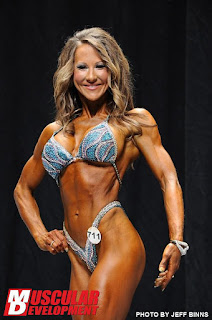 I placed 7th at nationals,  I feel a little bittersweet about it, I was the sickest I have ever been, and grateful for this moment this is what drove me to find a new solution! I did NOT want to be that coach to do what was taught to me to others., I struggled for years after with severe metabolic "damage". My hormones were shot and my thyroid is permanently damaged now.  Today I however am the healthiest I have ever been. I am able to teach client how to live a sustainable healthy lifestyle, how to diet and how NOT to diet....Through Reverse dieting and flexible dieting, I have been able to live a life that I never thought possible. Today I am leaner, stronger, and healthier woman, I never thought I could be free of the obsessive compulsive racket that lived in my head.

If you're eating a restricted diet, wow, I have lived that life, am it may work the first time but boy does it backfire. The chicken or fish with asparagus and rice, I have lived it.... If you can't see yourself on the "diet you're currently on in 6 months from now, you will regain the weight, and every time you do that YO YO you damage or you metabolism adapts to your current lifestyle and caloric intake.. So now that is your new set point!  So you can either do more cardio or eat less right.. WRONG... for how long till you  hurt yourself, that's what I did... there is another way but it takes work. And I would encourage you to do it with a coach that has walked in your shoes.

Diet's don't work, find a lifestyle that works for you..that you can maintain. If you don't have the tools find someone that does and that you can trust, someone that  listens to YOUR NEEDS and has your health first and foremost there main concern.